The other two, slight air and purging fire,
Are both with thee, wherever I abide;
The first my thought, the other my desire,
These present-absent with swift motion slide … – Shakespeare, sonnet 45

During her investigation on the lack of communication between the Council and the Great Keeps, Valonia had spoken briefly with the Head Abbott Amoranth of Empath Abbey. His answers on the matter seemed reasonable… though his tone was concerning. 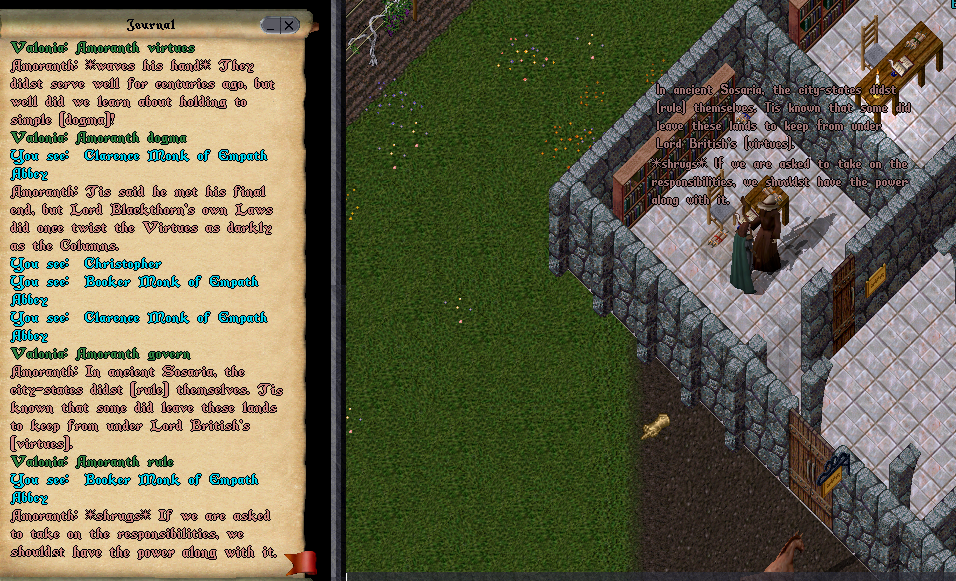 She would have to inform Court Mage Laurana about it later, she decided. But it also made her consider the situation of the other two Castles: Serpent’s Hold and the Lycaeum. If this sort of issue was present here at Empath Abbey… was something similar happening at the other two Castles?

Valonia found she was not much for sea travel, so she asked for aid from Tristan. Magic seemed like a more efficient route to the island stronghold than trying to traverse the sea. Before they left, they checked the air of Despise, and found the wanderer Coyote-… or Desmond, rather, who joined them in their task.

Valonia wasn’t entirely sure what to make of his changing name, but she had been able to apologize, and things seemed to be resolved between them. If there had been an issue at all? It was a little unclear. Regardless, he rejoined them, and his… odd familiarity with all of this was helpful, if slightly curious.

The island keep of Serpent’s Hold was somber and imposing, and the administrator, Sir Robin, did not appear to have time for the adventurers. However, his second-in-command, Sir Artos, had plenty to say. 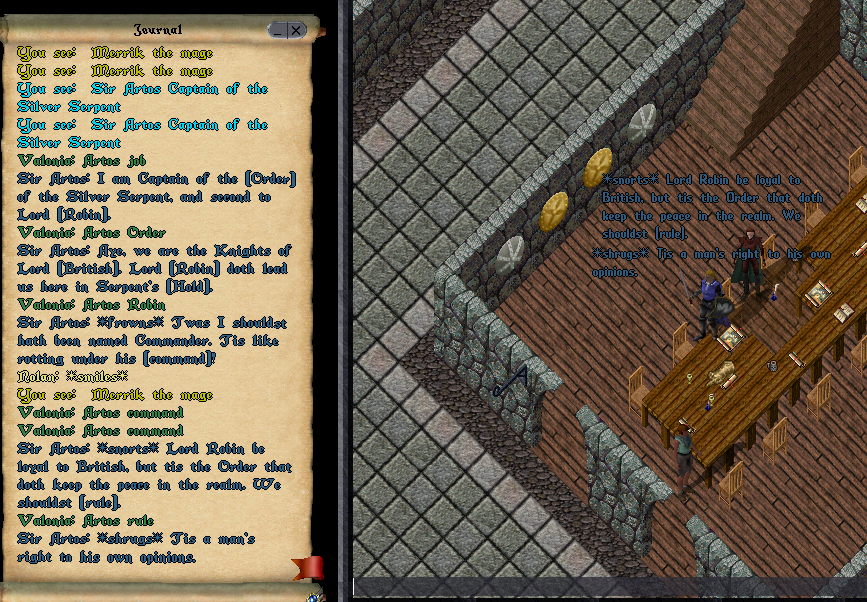 It seemed underlying discontent plagued Serpent’s Hold as well. Until the party could speak with Sir Robin, there was little to do about the matter… but it did serve to answer some questions about the situation, at least.

It was clear a different sort of malaise was plaguing the Great Castles. And that had to be addressed before anything else could be resolved.

Before Tristan, Desmond, and Valonia left the Hold, however, they looked upon the Flame of Courage. Unlike the fires of her dreams, this Flame felt clearer, more purgative to Valonia’s mind.

In her younger years, she might have found inspiration in this Flame had she visited it, she mused. And really, she still did. Being here was, in a way, standing in the footprints of heroes. Making a similar journey, though their purposes were admittedly more for tourism at the moment. Still, it was tempting to think bold, valiant thoughts of beating back the darkness, letting one’s desires light the way to glorious victory. But she was older now, and life had taught her a different sort of courage, given her a different sort of fire. Not the bright bold flame of youth, searing and brief. No, she found more solace in a banked fire these days, the slow burn of perseverance. And given her creeping doubts and worries about the future, she had the feeling that perseverance would be even more necessary in the days ahead.

The last of the Great Castles, the Lycaeum, remained on their agenda. And so it was there that the three went next. They spoke to the Head Mage Tydus, who seemed reticent to speak with random strangers. Still, he clarified some matters. There had been some conflicts between the Lycaeum and the Council. And it was at his discretion which requests from Castle British were being responded to, and he answered the ones with merit.

It had taken the Flame speaking to them to further loosen his tongue.

It had been as the three were leaving the Keep. Before they left, they decided to view the Flame there. To Valonia’s senses, it seemed… somehow colder than the Flame of Courage, but more illuminating. And then it spoke a word: Ver.

The three went back to Tydus, who seemed interested that it had spoken to them, and it made him more cooperative. He reassured the party that the Lycaeum would still offer support, and also offered a history of the Words of Passage, that they were used to open a seal.

A visit to the Lady Mariah provided more context into the situation at the Lycaeum, as well as the cult of dark magi. Desmond seemed oddly familiar with such things, and even Mariah looked at him as if he were… familiar somehow. But that aside, the mages with burned faces were the Cult of Tyball. Tyball was a mage who had originally summoned and unleashed the Slasher of Veils. It was only through the efforts of the Avatar himself that the demon was contained.

Valonia hoped they wouldn’t need to retrace those steps.

Still, it was clear that their path involved learning the Words of Passage at each of the Flames. Tristan surmised that they had to do it in order, which was why the Flame of Courage had not spoken to them. Their next destination would be Empath Abbey.

Mariah had said she would update Laurana on the group's activities, but Valonia sent a report on their progress.