It matters not how strait the gate,
How charged with punishments the scroll,
I am the master of my fate,
I am the captain of my soul. – “Invictus” - William Ernest Henley

The last of the Flames to visit was that of Courage. The group had visited it first actually, though it had not spoken to them at that time. But this time, it spoke the final word: Cor.

Sir Robin, however, was far less willing to speak. He did not want to discuss any difficulty the Order was having, and seemed to take offence at the implication that anything was wrong. That manner of mistrust felt strange to Valonia – though admittedly not unfamiliar. There had definitely been times in her life where the people around her did not open their hearts or minds to her in friendship and mutual trust, and she could not fault them for it. But it was strange that it should happen now of all times, now when she bore the scales of justice on her lapel of her druid’s cloak, when she had made oaths to serve Britannia rather than serve her own interests.

Still, she did not fault the man for his reticence. Though it inconvenienced them, it was not unreasonable for Sir Robin to doubt strangers. It was not like Valonia could produce any writ to prove that they were aiding Laurana. What reason did Robin have to believe their word?

But with his refusal to discuss, the visit became more to see the Flame than anything else. So it was that the group stood before the Flame once more, and Valonia found herself warmed by it once again. But of the three Flames, it was the one that brought up the most complicated emotions in her.

It reminded her of the certainty she held in her youth… which was both good and bad. She had been braver back then, perhaps… but far more selfish, too quick to anger and action. The path she had walked back then seemed brighter and bolder, less beset with doubt. But the path she walked now was moreright, she knew. It was slower, but more intentional and more deliberate. She took comfort in the Flame of Courage, yes, but she had made the decision to put aside raw courage and valor for the tempering influences of compassion and truth.

‘Valor is the cloak that protects the other seven virtues,’ she had heard it said. ‘Valor gathers selfish Courage and shares it with the beliefs that one holds and protects.’ The cloak she wore was green rather than red, but she liked to imagine that it was still a symbol of her decision to try and live with conviction. She made no claim to be a virtue scholar (which was admittedly a failing on her part, having chosen the path of a druid and all), nor did she delude herself into believing she was some paragon of Valor (Even of her current companions, there were those that fit that mold far more closely), but she still aspired to live virtuously regardless of her successes or failures. Maybe she hoped it was enough that she had made an intentional choice, rather than letting herself drift upon currents of emotion. She could not change the past, but she would work to make up for it, even with the knowledge that it would not fully ever be remedied. Still, perhaps perseverance would suffice.

Then again, she was probably overindulging in imaginings and fancy.

Still, perhaps the Flame just brought it out in people. Even Arthur spoke of his youth and the lessons his father spoke of. Valonia recalled the conversation she and Arthur had on it, and felt it was right that he was here. Tristan seemed contemplative as well, and no one, especially herself, could doubt the fire magus’ resolve and bravery. Vern too had lit his lantern on this Flame as he had with the others. It was clear he had been here even before the group had started being interested… though that posed more questions than answers.

At any rate, with their pilgrimage complete, they returned to the Court Mage, speaking to her of their results and findings, and the completed Word of Passage. She had little new information to give them, though she let the party know that Mariah had offered a warning about taking the Stygian Abyss lightly. A mission would not be allowed without the full agreement of the Council.

Valonia offered her reassurances that she most certainly did not want to go into the Abyss without a good cause. She would not balk if there was truly a need, but she knew better than to rush into a battle over mere conjecture. It was just that there were only a few things Valonia knew that the Word of Passage was used for. And as the gargoyles were practically extinct, there was little information that could be gleaned from them over the Codex of Ultimate Wisdom.

That left conjecture and speculation. Vern pointed out that Wrong had been sealed, and that the Word of Passage was a key… But Valonia would not go against her order’s decisions, especially not for mere conjecture or speculation. She told the others as much, saying she needed more proof before she took action.

They once again spoke of the Keeps, and the problems therein. Amoranth’s obdurance, Tydus’ maneuverings, and Robin’s suspicions. Laurana said they had begun to have more communications, though the quality of said communications were… questionable. It was unclear what would need to be done to earn the trust of those individuals. The former two were difficult enough as it was, while Laurana suggested that Robin tended to only trust members of his group. Joining the Order of the Silver Serpent was not really feasible, at least for Valonia. Even had she not chosen the druidic path, she had lost her honor a long time ago and had been working ever since to reclaim some semblance of it. Meanwhile, Arthur said he had no interest, Tristan was a mage not some manner of knight, and Vern… was as he normally was.

It seemed the group was at an impasse, holding a key but unsure of the lock. Beasts roamed the land, and men like beasts were with them. Though some communications had been restored, it was superficial at best. Furthermore, an outpost that Tristan had visited was now overrun by bandits, mages, and inhuman things with green skin. Laurana seemed to believe it was a sign of the plague Lady Jaana had spoken of.

As if they did not have enough problems.

Still, there were always other matters to investigate and perhaps remedy. Vern mentioned an oddity by Cove, and Tristan added information and brought them there as well. What they found was a fortress of strange savage men, who wore the skins of orcs and goblins. The battles between them kept all of them occupied… but where did these people come from?

Vern seemed to believe they had been summoned, as he had seen no sign of them elsewhere. And as strange as the man might be sometimes, Valonia believed him. She did not know who she believed the man truly was (and would not, even now, allow herself to speculate on the matter…), but she had been around him enough to trust his observations. He was a friend and an ally, and that was enough. Still, even if he was correct, it was not a full answer to the question. 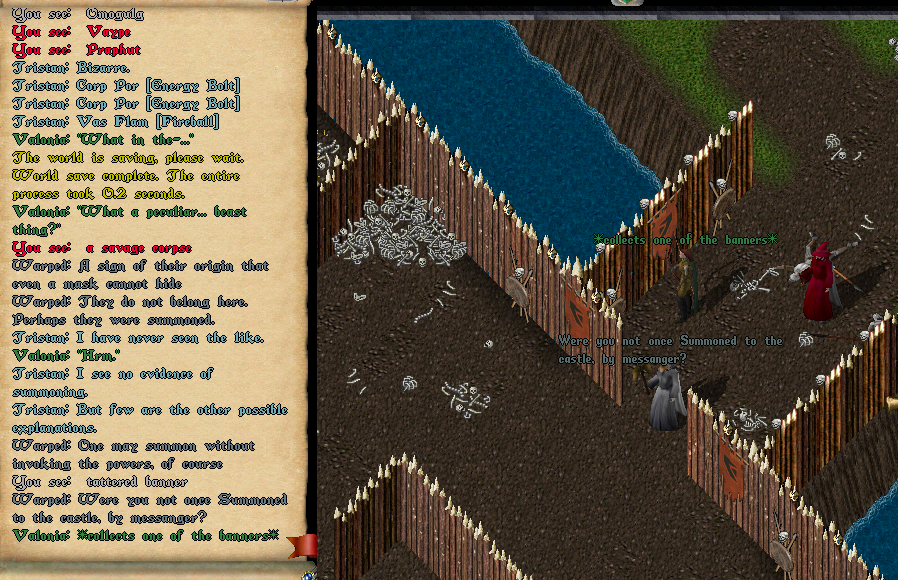 She collected a banner from their fortress, with the intent of finding someone to speak to of the matter. Perhaps Laurana would have more information. Or perhaps the ‘Bright Ones’ Vern spoke of? Though Valonia was uncertain what manner of creature would be able to answer such things.